Ryan helps the Forest Fringe to Pass the Torch

On Friday 11 August, 9pm, an array of filmmakers, musicians and poets will perform at the Cameo cinema to celebrate a decade of art and to look forward to beginning of something new. The event is free, on a pay what you can basis, we all hope to see you there.

This is a live performance, tickets are free and the artist will be collecting donations on a pay as you wish basis at the end of the show.

This is goodbye, for now. Forest Fringe is leaving the Edinburgh Festival to try out some new adventures elsewhere. This is our goodbye party and in the spirit of the last ten years we hope it will be big, free, eclectic, eccentric, frequently chaotic and occasionally, unexpectedly, very beautiful. Come for film, music, performance, drinks and weirdness with artists including Double Pussy Clit F*ck, Foxy & Husk, Ira Brand, Julia Taudevin, H Giles, Louise Orwin, Richard DeDomenici, Ryan Van Winkle, Tim Etchells and Tom Parkinson, with more to be announced very soon.

Just as importantly, this event is our attempt to raise some money for another group of artists to create their own space at the festival, just as we did over a decade ago. A passing of the torch. A long drawn-out goodbye and a hope for the beginning of something very new. 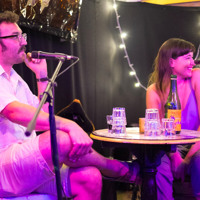 We did it live on August 6 at The Forest in Edinburgh. Featuring Louise Orwin talking about her show Pretty Ugly at the Forest Fringe, an excerpt from the fantastic Room, music from The Jellyman’s Daughter and the Culture Laser House Band featuring Snake-faced Jake. Presented by Ryan Van Winkle (@rvwable) and recorded by Alasdair Kampff. Produced by Colin Fraser (@kailworm) of Culture Laser Productions (@culturelaser). With thanks to Creative Scotland for their financial assistance.

The Multi-Coloured Culture Laser enters the Fringe fray for a night of performance, discussion, drinking, and hot hilarious august action. A podcast experience for your eyes & your hearts – done fucking live.

Room is bound to be a highlight of the 2014 Fringe Festival. Part radio play, part interactive storytelling, ROOM is inspired by analogue, literary based computer games like Dungeons and Dragons & Interactive Fiction. Catch the show at Pleasance all August

+ tunes from the Culture Laser Collective Band feat Jack of Diamonds & guests from the Midnight Train!