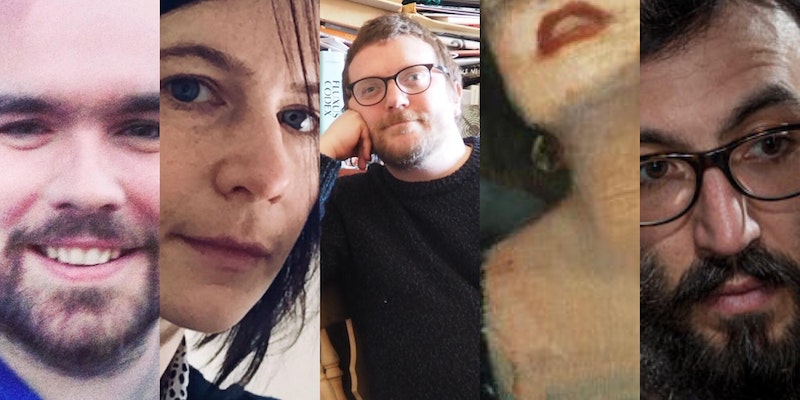 At this year’s StAnza International Poetry Festival I’ll be working alongside Anglophone poets Vicki Feaver and Tessa Berring and Francophone poets Michel Cassir and Aurélia Lassaque throughout the festival to create an entirely new poetic work. The finished product will be performed at 1pm on Saturday 4 March, Council Chambers in the Town Hall. Tickets are £4/£3. Hope to see you there.

Listen to new poetry in different languages as part of this year’s focus on French-language.

Throughout the week of StAnza 2017 Vicki Feaver and Tessa Berring will be working together with two francophone poets, Michel Cassir and Aurélia Lassaque, completing a collaborative residency in St Andrews, to create new work and translate each others’ poetry. Join us for a multilingual performance hosted by Ryan Van Winkle as they present the results of the residency: poetry doesn’t come fresher than this!

A joint event between StAnza, the Scottish Poetry Library and Literature Across Frontiers as part of the Literary Europe Live project supported by Creative Europe. Tessa says: This making of a poem was fun – the way my words came back from Ryan surrounded by or broken up by his words, how we began to develop themes and imagery, how kittens, clocks, and a body suddenly appeared when I least expected them…
Above all I enjoyed the intention to simply ‘write a poem’ together – no other motive or agenda beyond letting language emerge then pushing it to and fro to see what might happen.

She thinks prayer is an empty bucket,
an empty bucket for God to fill.
But all her buckets have hairline cracks
and God leaks away with her pistol,
all gunslinger & no horse. Or maybe
prayer is more like a pistol.
Don’t load it, float it –
watch it sink, evidence
of a very simple crime.
Guns and God-slingers – oh It is easy
to close one eye, take aim. Easy,
to take two hands & make a frame.
Easy, to press my palms flat in prayer.
Harder to ask, to fill the borders, to shoot.
He thinks prayer is like solitaire –
a game decided as the shuffle ends.
He calls god a deck of cards, pushes
the chips forward – all in.
As if we could hold the unicorn,
as if we were saints,
or angels wearing holsters! –
as if we were virgins lapping
up the gods as if the gods
were poison, as if we dare to risk
the lot with a miniature lead balloon
bringing us down – sinking.
Be quiet! Prayer is a slab of ice,
a cold cabinet, a sliding door,
the mysterious outline
of a body – something sweet,
a kitten mewing at your breast,
a chocolate puppy wagging
for the stick, a six-shooter,
chamber spinning,
the click-click-bang
of Russian Roulette,
an emptiness, a clock.
A clock? Take out the clock.
Take out the clock then take
out time, take out now
and take out never, take out
before and after this happened –
then look at all the horses
still lunging through sawdust
look at the dung beetles
looking for owls.
Look at the warm grease
lathering the windows,
ice melting, the sound
of a prayer’s faint hum —
no gunshots, no burst balloons
nothing
to tell a tale.
Bio: Tessa Berring is an Edinburgh based artist and writer. She studied cultural history at Aberdeen University followed by Sculpture and Drawing at Edinburgh College of Art. Her work emerges from both an exploration of the phenomenology of objects, and a playful love of text. Her poems are published in a selection of print and on line journals, and she exhibits her curious objects/installations regularly within Scotland, and further afield.

Ryan is at Simmer, a night of poetry and flavour

Later this month I’ll be hosting a really cool event, Simmer, a night of great food and awesome poets at Edinburgh Food Studio. On Thursday 31 March, 7.30pm I’ll be hosting a show with poets Tessa Berring, Peter Mackay, MacGillivray and Vicki Feaver, pairing poets and food for your delectation. Hope to see you there.

Join us at Edinburgh Food Studio for a unique collaboration between food & poetry.

On this very special night, we will use flavour, scent, and colour in response to some of Scotland’s most distinct voices. A delicious evening which will touch all of your senses.

Hosted by Connecticut born, Edinburgh resident Ryan Van Winkle, ‘Simmer’ pairs four poets with dishes carefully selected & prepared to illuminate and echo their work. Readings will be from Tessa Berring a poet and visual artist, Peter Mackay who writes evocatively in English and Gaelic, MacGillivray a performance artist, and Vicki Feaver shortlisted for the Costa Poetry Award and winner of the Forward prize for best single poem. Tessa Berring is an Edinburgh based artist. Exhibitions include ‘Making an Appearance’, Patriothall Gallery, and ‘Mutated Stars’ at Whitespace Gallery, with Paulina Sandberg. Her work emerges from an exploration of the appearance/phenomenology of objects and often includes a written or performed poetic element. A number of her poems are published in both print and on­line journals including Magma, and the Berlin based, Leopardskin and Limes. A recent review describes Tessa Berring’s work as ”simultaneously humorous and unsettling. It subverts with credible untruths, unties what it seems to sew up, attracts and disgusts.” *Vicki Feaver is the author of three poetry collections: Close Relatives (Secker, 1981); The Handless Maiden (Cape, 1994), winner of the Heinemann Award and shortlisted for the Whitebread Prize; and The Book of Blood (Cape, 2006), shortlisted for the 2006 Costa Poetry Award and the Forward Prize. Her poem ‘Judith’ won the Forward Prize for the best single poem. In 1993 she was awarded a Hawthornden Fellowship and in 1999 a Cholmondeley Award. She is a Professor Emerita at Chichester University where she previously taught creative writing. She now lives in Dunsyre in South Lanarkshire and Leith in Edinburgh.

Hear Vicki read ‘The Gun’ and her award­winning ‘Judith’ on the Poetry Archive. *MacGillivray has walked in a straight line with a dead wolf on her shoulders through the back streets of Vegas into the Nevada desert, eaten broken chandelier glass in a derelict East German shopping mall, headbanged in gold medieval stocks in Birmingham allotments, burnt on a sunbed wearing conquistador armour in Edinburgh’s underground city, breast­fed a Highland swan in Oxford and regurgitated red roses in Greenland. She remains clan chief. *Pàdraig MacAoidh (Peter Mackay) is originally from the Isle of Lewis, but now lives in Edinburgh. He writes in Scottish Gaelic and English and has written one full collection of poems,

Gu Leòr / Galore, published by Acair in 2105, and a pamphlet, From Another Island, published by Clutag Press in 2010. He is also a broadcaster and lecturer; he teaches at the University of St Andrews and is BBC/AHRC New Generation Thinker 2015. Hear him read selections of his work in Gaelic and English on Lyrikline.

The price for this one-off colourful collaboration of dinner and poetry is £35. To book email book@edinburghfoodstudio.co or call 0131 258 0758.